Making the way through the warm quilt to the side table, her hands blindly tried to spot the ringing alarm . Few seconds of unsuccessful attempts and then she finally managed to grab it and shut it up.
Anyways, she needed no alarms today . She had been sleepless the entire night . She slid the quilt from her body and let the cool December breeze carress her, but all it did was bringing back the sore in her body . After all , winters make injuries more painful .

She went to the window and pulled the curtains aside . Her hands subconsciously moved to cover the eyes . Maybe her eyes swollen from all the night crying could not bear the sudden light . In this light now, she was able to see the scars and bruises all over her body, the colour of which matched exactly with the vermilion she’d been putting on her forehead for 2 years now . 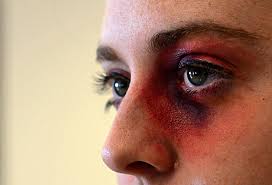 On her way to the kitchen something pierced through her right foot and she wailed with utter pain. That was the fate of a glass bottle that boasted of having the world’s finest alcohol in it . She broomed the glass pieces and put her messy house in order, which otherwise looked as if devastated by some earthquake .

It was her routine to make 2 cups of coffee and wake her husband up for office . But not today! Not only did she prepare just a single cup but even did not wake her husband up as per the routine. Sipping coffee alone in the balcony of her house , she was deeply in some contemplation . The winter breeze was chilling, but it seemed to have no effect on her. One such swift wave tossed her hairs all over her face . Placing her locks back in place , she thought of these waves . Every year winters bring them , it stays for a short time and then goes back making way for the springs . If these breeze too retreat then why is she still dragging herself forward in this hurtful relationship? Isn’t this high time for her to retreat too?

A smile appeared on her face. She dressed herself in her best attire after a hot shower and groomed herself to look her best . She wore her long forgotten jewellery today, her smile .

She put a piece of paper on the dining table and putting the suitcase on the floor moved towards the door . She captured a glance of her husband through the ajar door who was still sleeping, peacefully .

In the paper on the table was scribbled “Happy anniversary to you and a very Happy Birthday to me.”

“I don’t see any reason as to why engineering colleges can’t have a creative writing department. Why shouldn’t every college in India have a writing programme? Even engineers can benefit from the art of writing. That should not be the prerogative and the bastion of writers only. All the best for future issues of Sarjana.” … END_OF_DOCUMENT_TOKEN_TO_BE_REPLACED